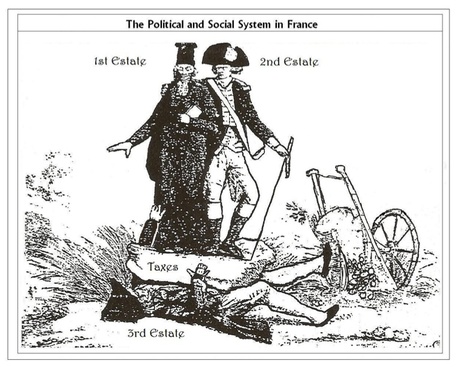 5. Now Mr. Fitton will explain the situation in France --- 97% are poor and the top 2% are extravagantly using the wealth (Other 1% are emerging middle class).

Show the youtube clip bellow (some student project on French revolution)  and ask them to predict 4 things that will happen in France during that time period. And the "French Revolution in a Nutshell."
6.  Go over unit outline – What students should know by end of UNIT.  Ask students to read through all of the vocabulary and check mark any words they know already. Ask class to say how many know 5 or more, how many know 10 or more etc… which ones do most people know? Do some vocab predictions.

Download File
7.  Read introduction to chapter – page 56 as a class. Perhaps we will read it with outrageous French Accents.

8. Explain that now we are going to look at a powerpoint on French society in the 18th Century. Correct my stats (poor =97%, rich = 1% developing mid class = 2%). The set up of society helped lead to the Revolution

9.  Slideshow on the groups living in France.  --- give handout to take notes.  Also, examine the picture below of poor people in 18th century. As a class, what do we notice?

Download File
10. Play introduction to the French Revolution on History Today Video.  Recap what we know about society in France in the 18th Century. "History Channel Documentary."   Play from 0:00-3:29  (https://www.youtube.com/watch?v=Rxu5vhHktaQ)

11. Assignment: Do questions 1-5 on the chapter questions sheet.

3. Now try some French food. Mr. Fitton will bring in a baguette and some blue cheese, and grapes – also some grape juice. Then do a small lesson on juice tasting.

A. First, must swirl the juice in the glass and smell it; look at what it leaves on the side of the glass (legs)
B. Describe what you smell (get class to share)
C. Take a small sip and swirl it around in your mouth. Swallow and describe initial taste.
D. Take a little more drink and suck in the juice with some air this time, this oxidizes the taste.
E. Put some food in mouth and describe how it changes the taste.
5. Put the picture Louis the 14 showing off his legs on the overhead and then show the clip from “The Good Life” Ask the students What do you think these two have in common? (3:02-end)

-We will also have a Louis XIV Leg Contest. Students must strike a pose like Louis in these pictures and as a class, we will vote on who has the best "Louis Legs" impression.

Download File
9. ASSIGNMENT: We will conduct some research. Students will read pages 64, 66 and 67 on their own and make a list of reasons that Louis XVI and Marie Antoinette were unsuitable to govern France in 1774.  – and keep list of interesting facts.

Download File
Answer key: While completing their research, students were able to come up with the following answers. We will go over this as a class.

Marie
-Interested in glittering life at court
-offended many with attitudes towards French customs
-Idealized French Peasant life, had a farm near Versailles to play at Farming.
-spent large amounts on jewels, despite peasants starving
-hired and fired people with no governing experience (Fired Turgot because he wanted to tax nobles)

10. Work on chapter questions. Students can complete their unit questions.

Lesson 3 - The Concept of "Philosophy"

3. Put up Calvin and Hobbes Cartoon. What are the kinds of questions Calvin is asking called?

Download File
4. Ask them what Philosophy is. Record ideas on the board.  (Definition: the study of the fundamental reality of knowledge, existence and reality.)

5. Put up quotes about philosophy.

Download File
6. The Terrible French Kings weren’t the only thing that lead to the revolution, New ideas brewing in France also contributed to revolution.

8. Groups of 4 complete The Philosophes and Censorship Sheet. Hand in when done and work on chapter questions.
-We will read over the notes on French Enlightenment and Philosophes (bottom of first page)
-Each group will get a question from the back of the sheet - will have to answer. Then will put them into a jigsaw group to explain it to others.
-Brief lesson on paraphrasing
-Each new group will then get a quote and have to paraphrase what it means
-Group must write out the quote, what it means, and a picture on the windows with window writers.
-Field Trip: as a class, we will go to a coffee shop and answer the philosophes questions and discuss info on the sheet in a modern day "salon."

Download File
Give tips on paraphrasing:
a. Break sentence down into small parts and put in your own words.
b. Look up unfamiliar words.
c. Don’t worry about every word, just the key ones.

2. Get them to practice the big quotes on the sheet. These were the big ideas that led to revolution that supported personal liberties and the abolishment of absolute monarchy. In pairs, assign a quote. Then they write it on board or window with a picture to help them remember.

3. Finish chapter questions up to 17

Mark together and Show clips for each philosopher (Locke, Voltaite, Rousseau)
6. Present Quotes

7. The Revolution Begins Jigsaw: Hand out the "fill in the blank" sheet on The Revolution Begins. See assignment attached below. Number students off in to seven groups (should be 3-4 in each).  Assign each group a section that they must read from the text as a group (each student read a paragraph until it is done) and fill in the blanks. Each groups reads one of the following sections:

1. A Crisis
2. The Estates General
3. The Spirit of the Revolution Grows
4. The Fall of The Bastille
5. The Great Fear
6. Paris and the King
7. The Declaration of the Rights of Man and Citizen

Get them to meet with their group, read and complete their section.

Download File
8. Work on chapter questions. Rest are due next day

Lesson: Main Events and Execution of the King

1. Watch the video God and Grain, which reviews the beginning of the revolution and causes
2. Talk about the revolutionary wars (at war with Holland, Britain, Prussia, Austria and Spain they all worried revolution might spread) and how they made the National Convention (formerly National Assembly) nervous that they might lose and the monarchy would be restored. They decided to put Louis on trial for his crimes and executed him by guillotine on January 21, 1793. France believes in revolution so much that they actually begin to do well in 1792 and win a victory at Valmy.

Download File
5. Show Machines of Malice section on the guillotine

Lesson: The Reign of Terror

4. Watch the video "The Headless Monarch
4. Activity: Students will be led through a simulation called the “Dot-Game”

Rules
1. Students pick a small piece of paper from a plastic bag. Some of the pieces of paper have a red dot on them while most of the pieces are blank. Students are not to reveal what is on their piece of paper to anyone else. Tell them there are four red dots, but really there are 7 (give 5 minutes, after that whatever they have is their group)
2. The object of the “game” is for the students to create the largest group possible without any red dots. They may question each other as they form groups. The largest group without a member with a red dot wins. Any person who holds a red dot and has infiltrated a group wins.
3. The purpose of the “game” is for the students to experience some of the suspicions associated with the Reign of Terror.

5. How did they feel when they were asking people questions? What made them decide to trust them or not?

6. Write the following notes on the board:
-In 1793 after the death of Louis the 16th, The Jacobins (lead by Danton and Robespierre) and Sans Culottes (lead by Marat) took over the National/Legislative Assembly (which changed its name to the national convention).
-They were determined that the changes/advances made by the Revolution would not be reversed.
-They began to attack the Girondists.
-A group was a established called “The Committee of Public Safety” whose job it was to find anyone and anything against the revolution/republic.
-They passed the “Law of Suspects” which allowed them to put on trial and kill anyone suspected of being against the republic/or hoarding food/or being nobles
-Became like a witch hunt, a way to get rid of your neighbours
-Made many radical changes to France now that Robespierre has all the power (Metric, new calendar, ended slavery and tried to put through a law for free schools and universal suffrage, reorganized army)
-Soon the Terror turned on its leader Robespierre was guillotined
-A government called the directory; run by three people (to avoid dictatorship took over.)

Lesson: Conclusion of The French Revolution

UNIT MATRIX - See below for a copy of a completed answer key to the unit pictorial matrix. On the rear of the student sheet is a unit ASR

Download File
1. Explain test
2. Finish documentary on the French Revolution
3. Go over key ideas of the unit
4. Distribute an ASR?

Due at end of class. Will present before test tomorrow

5. Alternatively we could watch History Bites The French Revolution