3. Write on the board: "Civilization has run on ahead of the soul of man, and is producing faster than he can think and﻿ give thanks." -- GK Chesterton

5. We are history Spoof (only show up to 6 minutes in)
This makes fun of things that went on during the industrial revolution. What are something things he makes fun of that you can assume were going on during the industrial revolution?
6. Go on Scavenger Hunt to fill in Industrial and Agricultural Revolution Matrix. Explain Rules. Mr. Fitton will provide a "Unit Matrix." Students are to go around the school and collect data based on the scavenger hunt and place into the fill in the blanks.

Download File
7. Hand out chapter questions and begin working on them.
Play nationalistic songs in the background: God Save the Queen, Rule Britannia, Britannia Rules the Waves and Hope and Glory (see below)

2. Ask them what the following quote means: "Rule, Britannia! rule the waves: Britons never will be slaves."

How do you predict that they treated people in the colonies? Explain the slave trade, 8 million died on ships, horrendous conditions

4. Show "British Things" video to introduce how we are going to discuss Colonialism and trade.

Download File
6. Activity:
-Divide class into 6 small groups.  Each group receives 1 short writing on one of Britain’s colonies, and each member receives an organizer to fill in.  They are to gather the required information by reading and filling in their organizer.  Included is a mapping exercise that has them shade in where each colony was.
-Have each group choose a spokesperson and fill in the organizer completely as presentations are given. – they can put it onto an overhead that I circulate.
-Then put up for the class to copy

Download File
7.  Work on chapter questions for the rest of class.

Map of British Colonial Possessions - "The Sun Never Sets on the British Empire." 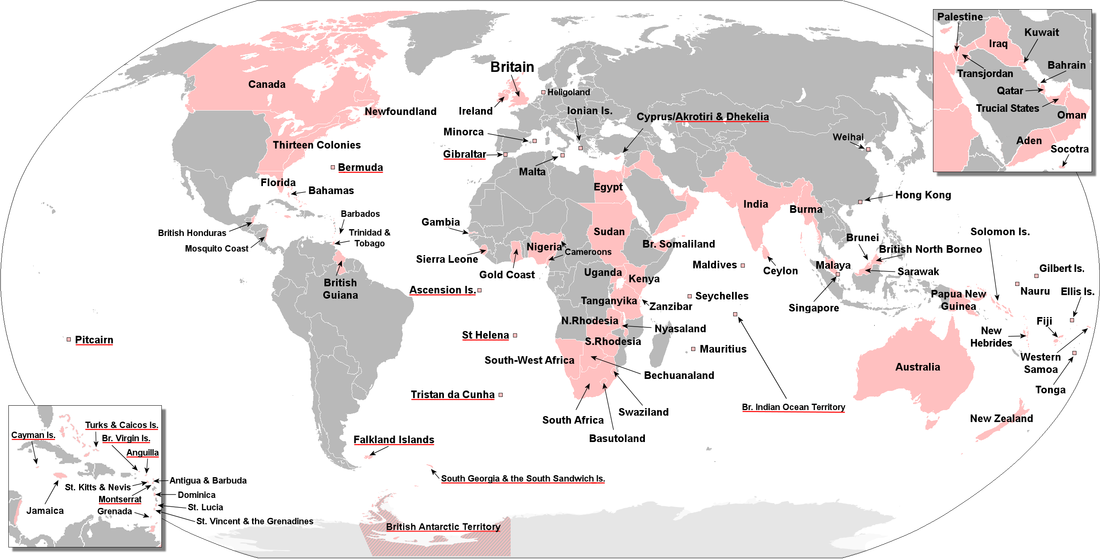 1. Go over Phrases: “The Sun Never Sets on the British Empire” and “Rule Britannia, Britannia rules the Waves,” review the colonies and the products that Britain got them from.  Have students take out the notes from last class on the colonies. Get them to list the colonies and which items came from each one.

See below for a key: Display the key and go over the items (most important part). For the kids - if they are unwilling to share

Download File
2. Make a list of the best inventions of all time (MRI, Antibiotics, X-Ray, computers) See how it fits with the internet list. (overhead below)

Download File
3. James Watt Clip: Explain who James Watt was – the significance of his discovery. Driving force behind the Industrial Revolution. Allowed then to go easily between colonies and ship goods. Play youtube clip (Below): 2:00-5:19 (about Watt – only play the small excerpt)
4. Summarize pages 140-141 for them in a mini lecture

-Industrial Revolution could only happen if they could ship good from farms and factories to Market cheaply, also raw materials must be brought to them from all over the world
-1700 English transportation system was poor, roads medieval and a muddy mess in the frequent rain
- Horses carried good, but slow and must be fed and rested so inefficient, waterways missed whole large sections of the country. Needed good roads for wagons
-Turnpike: Private companies build road and charge toll (so no cost to government)
-Macadam roads: three layers of graded stone with largest stones at bottom and fine gravel on top, slop road to side so water rolls off.

-FIELD TRIP - Take class out to the road that goes between the class across the hall and the portable. (show them one on the road outside the portable) Explain why it would be sloped, and why it would have rocks/sand (helps with drainage) - that's why it doesn't bog down.

-canals built too, dropped shipping costs by 2/3
-some canals build high above the ground. 4000km by early 19th Century 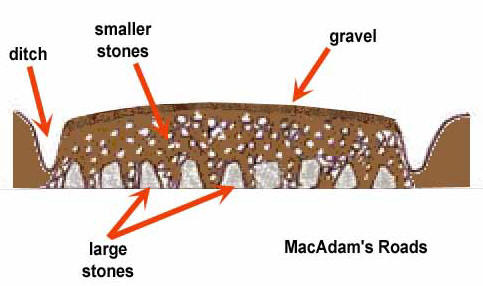 5. DVD: Queen Victoria’s empire (clip below). Play DVD from 0-7:30 minutes. This will help to review the information we’ve learned so far.  (queen Victoria Engines of Change part 1/4)
7. Trains: Read page 142 as a class: discuss dangers of trains and high-speed travel. Watch crash course to see how trains changed people's lives (much like the internet has changed ours).

After watching, give students a moment to discuss with their partners - each students must say one impact that the train had on modern day. (Tell students this before we watch the next clip)
8. Notes on George Stevenson, they fill in blanks on overhead and then add cues and summary

Download File
9. Work on Chapter Questions until end of the class.

1. Play the first 45 seconds of Paper Planes by MIA. Ask the kids: Who likes money? Who wants to make a lot of it? How do you do that?


2. Have students copy down the following notes:

3. Cottage industry cars – get students to each make a car. Must be perfect – best car wins part of a chocolate bar.


4. When done work on chapter questions.

1. Show cars and vote on best one. How do you feel about it? This is the Cottage industry

2. Factory simulation with Car making. --- make MANY Copies of the car sheet

A. Get Students to put the desks into 2 rows
B. Get ready to play some Gregorian chants, dark music, heavy metal to create atmosphere.
C. Give instructions to students:  OVERHEAD ATTACHED.
D. Some jobs may appear two times. – need boxes for finished products.
E. During simulation, be sure to yell at kids and drive them hard. Rip up cars, assign someone the job of crawling along the floor picking up scraps.
F. Prize to team with most cars made.

Download File
3. How do you feel about these cars? Class discussion.

7. Ask students take out a piece of paper. They will watch three documentaries today and have to write down five interesting things from each. We are going to be looking at modern day child labour and sweatshops to see the link to the past that we are studying.  URLS are Below, and so are the videos. URLS are in case the video does not work.

After each video, stop and give 2 minutes to write down what they found interesting. Discuss as a class and then go to the next video.
8. If time, have students take out their chapter questions. Most should be done. Write down "9-21 on the board, vertically - these correspond to questions from the chapter questions.
-Ask students who is done the questions - get those who are done to do the last questions, and those who are not done to do the earlier questions - each student should get a question.
-Get them to write the answers on the board big enough for people to see. Students who have not finished need to copy the answers. We will also go over them next day.

Download File
11. Distribute a copy of the Final Exam to Students so they know in advance and can prepare.