1. As a class, we will start by watching the Disney Propaganda Film "Education for Death." Students will have to come up with some questions about "Totalitarianism" based on viewing this clip and their background knowledge. We will use these questions to shape our upcoming lecture. Items may be added to the lessons below based on student curiosity and questions.

-Students will write down their questions and submit to Mr. Fitton, so he can shape the next few days around those questions.

2. Teach class as an authoritarian teacher. Desks in rows. Students sit up straight. No talking, no moving. Random kids get kicked out.

-Also, to get kids thinking about totalitarianism, do the following activity:

-The goal here is to link to the idea of authoritarianism. The main questions that will shape our conversation are: How can authoritarianism exist and why do people submit to it? See if the class can come up with other questions that I will answer through the use of the class matrix:
4.  Go over unit Matrix on the concept of "Totalitarianism." Each row of students has to come up with a probing question at the end.
-Students must create a short answer question and an essay question on the rear of their concept matrix.

Below is a video of the Lecture information on Totalitarianism that Mr. Fitton taught the class. If you are away, please get the handout that has this same information on it.  Click the video below to learn about totalitarianism. Please note, you may need to fill in some additional information on your sheet since some of it is only contained on the whiteboard.  See below for 11 X 17 handout of the Matrix. Can print in any size.

Review of Where We Left Off

Lesson 2: Appeasement: Revisiting the Legacy of Chamberlain and Daladier.

2. Access Prior Knowledge about appeasement. What do students already know – put on the board.

3. Powerpoint presentation on appeasement. Students take notes.  After taking notes, students should come up with possible questions that could be asked on a test.  As with Cornell notes, the next day, briefly review the notes and write a 2-3 sentence summary and add your "Cues" to the left side of the page.

Download File
4. Film – WW2 In Colour. Play 0:00- 04:24 (Goes over Blitzkrieg)  https://www.youtube.com/watch?v=ePWREUJzWac
Blitzkrieg to the bomb:  5:50-15:07
Below is a comedic rendition of Neville Chamberlain and the "Peace in our Time Speech." It is intercut with actual news footage.  To the right is the full uncut version, which drags a bit.
5. Students are to complete the Appeasement handouts and assignments. We will have 40 minutes of class time. Due in two days. Copies available in class.

A good resource is the  Khan Academy for student who want to see it: https://www.khanacademy.org/humanities/world-history/euro-hist/hitler-nazis/v/nazi-aggression-and-appeasement

​-Above is a video on appeasement as well.

Lesson 2.5 - Poland and the Aftermath of Appeasement

1. Review of last day. How Good a Historian Are You - watch the two video clips below and see if you can identify any historical inaccuracies

Dunkirk and the Fall of France

1. View Slideshow below on the Miracle at Dunkirk and on how Hitler defeated France. Fill in notes. 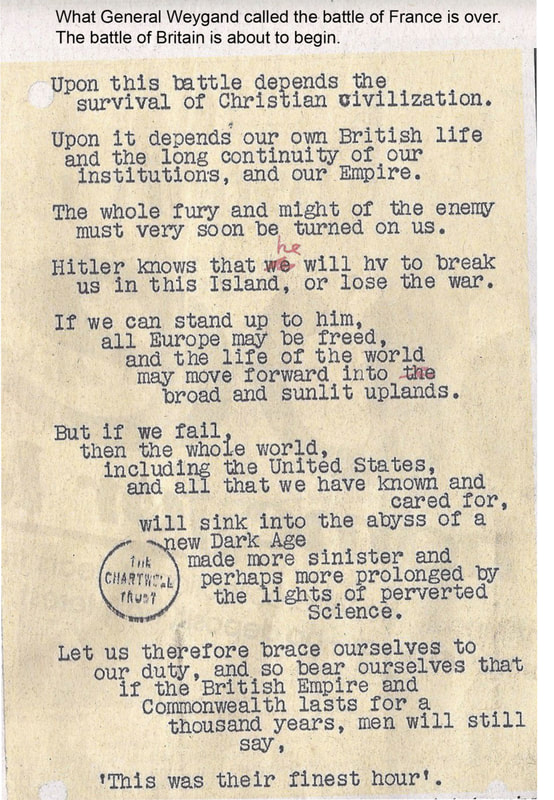 1. Video Review of Last class
-Play Video of Horrible Histories -  Churchill Planning the war to start as Hook to class

We will also play "WW2 T/F Battle Ship" - Handout down a bit on page.
3 Notes on Barbarossa – Put around the room. Students copy down the info and then do lecture so they can pay attention.
-In the powerpoint are two video clips to break up the monotony – From Horrible Histories

7. Open up PPT below on "Barbarossa"
Go to slide where we finished last time - students are to take notes on that slide onwards. Students have a note sheet to fill in the blanks.
Within the slideshow are some video clips. Please note, that links to the video clips therein are also down below this writing.
Watch two videos during the powerpoint
http://www.youtube.com/watch?v=hn1VxaMEjRU  (Are we the baddies?)
http://www.youtube.com/watch?v=OUX7mAeeF04  (Stalingrad report –have nothing)

-See below two videos for rest of lesson...

-If class time remaining, students must get into groups of 2-3 and create 5 True or False Questions about Operation Barbarossa for an upcoming game we will play during the lesson the Battle of the Atlantic

1. As a review activity, the teacher will hand out the True of False questions created by students about Operation Barbarossa and North Africa lecture.

Students are given a "Battleship Grid" (see below) and are to play according to the instructions.

Download File
Teacher will explain that today's lesson is about the battle of the Atlantic.

2. Show Two video clips from U571 - Explain the history behind the clips.  What do they think of the USA taking credit?(Highly Inaccurate: it was actually Britain (members on HMS Bulldog) who captured the Enigma machine from U-110 in the North Atlantic in May 1941.) However, the director/producer changed it to an American ship. The British Prime Minister at the time the movie came out admonished the company and was outraged.

4. PPT: Notes on D- Day. Throughout the Powerpoint there are several videos.

Hitler's Final Days - We Will watch the film: The Downfall

The Downfall is a German Foreign film which captures Hitler's last weeks in power. Powerful acting coupled with excellent History makes it a phenomenal film.
Students can bring popcorn and snacks. Only those who have finished work and are up to date may watch the film.  Below is a preview so that you can take a look.

Famous Scene from "The Downfall" where Hitler learns that the war is going poorly. Bruno Ganz plays Hitler and his acting is so powerful that it has spawned countless internet parodies. Ganz mentions that he is more famous from the parodies than the film.
Below is a parody of the scene with faulty subtitles. It makes fun of Chuck Norris. There are hundreds of other parodies on youtube. Most are inappropriate for class.  Also see a copy of one about our class.
1.  Review film “The Downfall” as a class.  Any questions they might have. Guide discussion with questions about cinematography, acting, lighting, music.
-Probe for how films like this provide a greater understanding of the History of the Era.

2. Notes/PPT on Battle of the Pacific. (See below)

End of the War and End of Blitzkrieg to the Bomb

1. Each student in class receives a card with or without a dot on it. Reason to be explained at the end of the class.
2. Holocaust Lecture PPT.  This powerpoint is in some ways meant to mimic the term paper that students will be writing. This powerpoint takes the form in some ways of a term paper. It takes a contentious topic and explains that there are two views about it. Then provides evidence and weighs both sides. I will let the class come up with a conclusion.
(Discusses the Functionalist/Intentionalist debate concerning the holocaust).
3. Band of Brothers - "Why we Fight"
https://www.youtube.com/watch?v=sHcJtU9dr6I
4. Any questions from the class.

4. In Groups, students will summarize the 15 key points from the lecture/notes by writing captions below Hitler's Angry Rant to reveal their understanding of the key points from the notes.  Students must also about 2 key significances of the event on History. 3 points assignment for equal input and team work, as decided by the group.

How to Start:
1. Re-read the section of notes.
2. Determine the key points needed to understand the event.
3. Determine the significance of the event to history.
4. Begin to write your captions in iMovie.
5. You will have 2 hours of class time to complete all of those tasks and get ready to present.
6. Select the best two minutes of your project and write on the board - we will not show the entirety of every project as the class would easily tire of seeing the rant for an entire block.
7. As a class, we will view the projects in chronological order.

A Couple of Humorous Videos That We May Examine!

Article on Dutch Resistance --- Students are to read and highlight the three most important facts and one question they have. Then, they partner up and go for a walk around the field where they share the three things they came up with and why they chose them. Then they also pose a question and see if the partner can answer it. Switch. Repeat. Come back to class.

This helps give us some background for our guest speaker who was a member of the Dutch resistance.